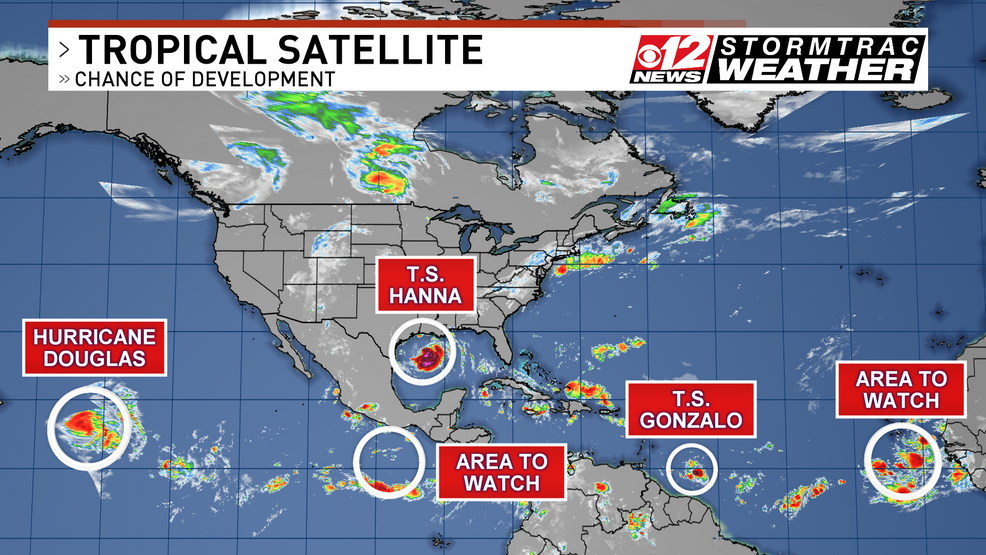 Areas of Development - Both Basins (WPEC)

Over the past week, it seems that anything that's out in the tropics will form into a tropical system. Case in point, we have two tropical storms and one hurricane that the United States is keeping a close watch on, all of which will impact landmasses this weekend.

First, we start with the most immediate storm - Tropical Storm Hanna. It's the eight named storm of the 2020 Atlantic Hurricane Season, becoming the earliest 'H' named storm, beating the previous record held by Harvey in 2005. It was upgraded last night as hurricane hunters found 40 mph winds around the center of the storm.

This morning, Hanna has continued to organize very well, and we're finding a tightening center of circulation and a slight increase in winds. As of the 11am update, Tropical Storm Hanna has maximum sustained winds of 45 mph and a central pressure of 1000 millibars.

Hanna is likely to continue to strengthen and develop up until landfall as the Gulf of Mexico features exceptionally warm temperatures and very little wind shear. The only real limiting factor to Hanna is time. If it had a longer time over the Gulf it would likely become a hurricane, but due to it's time constraints, we're only expecting to see a moderate to strong tropical storm upon landfall.

Elsewhere in the Atlantic, Tropical Storm Gonzalo continues to defy odds, fighting off a very hostile environment of dry air courtesy of a Saharan Air Layer.

Gonzalo is a very small storm, less than 200 miles wide. Small storms are exceptionally difficult to forecast because they can quickly ramp up. However, due to their size they are very susceptible to hostile environments. We've seen both of these happen to Gonzalo over the past 48 hours, as the storm quickly ramped up to a moderate tropical storm two days ago, but has struggled to fight the dry air that gets entrained into its center.

Regardless, Gonzalo continues to hold steady as a moderate tropical storm. As of the 11am update, Tropical Storm Gonzalo has maximum sustained winds of 50 mph and a central pressure of 1002 millibars.

Hurricane Hunters are based in the southern windward islands and will be investigating this storm later this afternoon. We should begin to get a better idea of how the core of Gonzalo is organized, which should lead to a better long-term intensity forecast. Again, small storms are subject to quick ramp ups and ramp downs in intensity, so the confidence in the strength of this storm remains low.

Long-term forecasts bring Tropical Storm Gonzalo into an area known as the Caribbean Graveyard next week. This area typically kills off tropical systems this time of the year due to enhanced sinking air and strong wind shear. However, if Gonzalo strengthens some before moving into this region, it certainly could remain around longer than forecast. The long-term track of Gonzalo has very low confidence, and interests in the Caribbean should keep an eye on this system through Monday for updates.

We switch basins for Hurricane Douglas, the first hurricane and major hurricane of the 2020 Eastern Pacific season. This storm is likely to impact Hawaii this weekend, bringing heavy rains, strong winds and mudslides to nearly all of the island chain.

As of the 11am advisory, Hurricane Douglas has weakened some. Right now, it is moving west with maximum sustained winds of 120 mph and a minimum central pressure of 962 millibars. Recently, Douglas completed an eyewall replacement cycle. While this generally weakens the storm, it also widens the wind field, increasing the threat that stronger winds will impact the island chain this Sunday. It's also moving into an area of cooler ocean temperatures, so gradual weakening is expected as the storm approaches the Hawaiian chain through this weekend.

Hawaii does not have tropical alerts yet, but hurricane watches and warnings are probably coming by the end of day Friday.

Finally, elsewhere in the Atlantic basin we are watching a very robust tropical wave coming off of Africa. While this wave is not likely to develop over the next couple of days, it shows favorable signs of developing over the next 5 days, especially by mid-week next week.

Long-term tracks feature a building Bermuda high to it's north, bringing light wind shear, warm water temperatures and a steering flow which would favor a close approach towards landmasses in the northern Caribbean and the United States. Right now, nothing to worry about but it's something we certainly need to keep a watch on. It's best you use your time reviewing your hurricane kit and plan now, and not when a tropical system threatens Florida. We've been lucky so far this year, let's hope that continues.

Police: Men broke into Florida stores but left behind wallet and ID