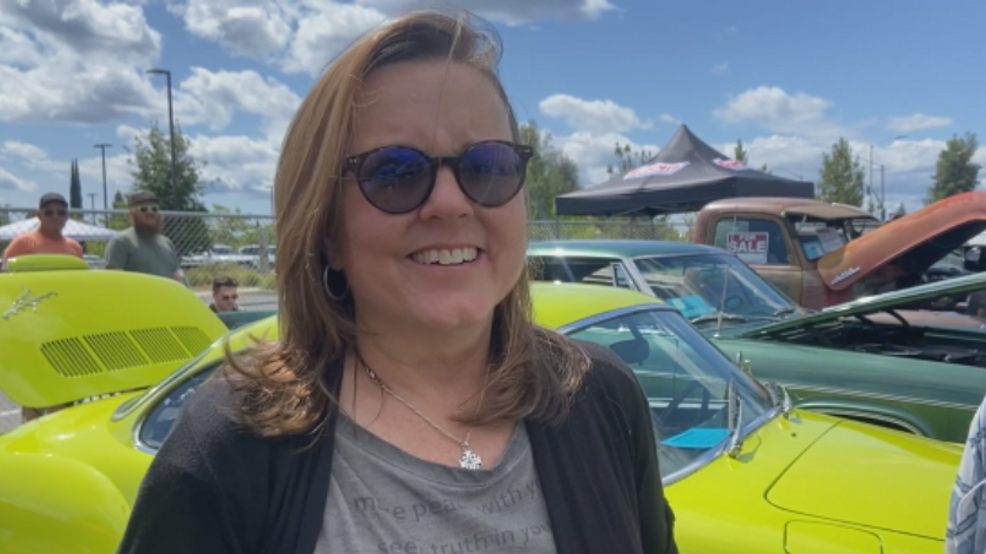 Joyce Lyn sold her 1974 Karmann Ghia VW in 1990, and on Saturday at Kool April Nites, her family gifted her with an identical one. (Photo: KRCR)

REDDING, Calif. (KRCR) — Almost 2,000 cars registered for the big Kool April Nites show in Redding, California — each one with its own story.

In 1990, Joyce Lyn sold her 1974 Karmann Ghia, and it was something she regretted for the rest of her life.

“It was just sitting there at the house for years and I was like, 'Yeah, just sell it,' and then when I got back I was like, 'Ahhh, I wish I had it,'" Lyn said.

Knowing how much that lime green car meant to Lyn, her family came together to find one for her.

“Five years ago, we started looking — and finding this color is very, very hard. So, we were really adamant about finding the green color," her sister, Carolyn Wenham, said.

Then they found it and got to work: the whole family played a part over the last six months restoring Lyn’s car. Her father, Del Dabne, spent time every single day on it.

“It’s great," Dabne said. "It’s just love. Every minute of it I enjoyed it. And God let me live just long enough for her to get it.”

“Now I know why dad wanted me up here so bad for this show," Lyn said. She had no idea what was in store for her at the car show but hugs were shared and tears were shed by the end of it.

“I’m like, 'There’s a car just like mine,'" Lyn said. "I beelined it over here and then the gentleman was showing me how he did it and then I saw a picture of my dad and then I really [knew].”

When Joyce finally got the car, all those months of work were worth it because it was for family.

“I love them," Dabne said with tears in his eyes.

“We have a good family," Jane, her mother, said.